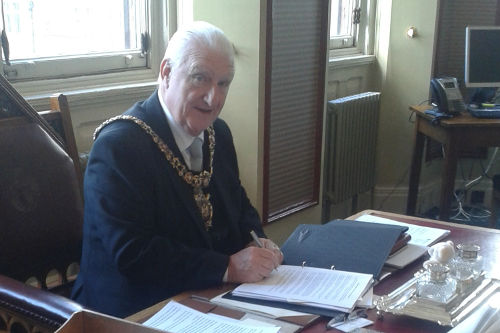 All UK and Ireland members of NFLA, along with all UK and Ireland members of the separate organisation Mayors for Peace; have been requested to ask their civic leaders to formally endorse a joint statement made last month on the 75th anniversary of the Hiroshima atomic bombing. This was made by the leaders of the groups Mayors for Peace, Religions for Peace and Parliamentarians for Non-Proliferation and Nuclear Disarmament (PNND) and it calls for renewed efforts to reach the goal of a nuclear weapons free world. (1)
The statement:

• Highlights the continuing risks of a nuclear catastrophe – whether by accident, miscalculation or intent – and “the moral and security imperative to achieve nuclear abolition”,

• Notes that “Mayors and Civic Leaders are responsible for protecting the safety and welfare of their citizens, as well as for preserving and promoting cultural and environmental values and heritages”,

• Deplores the nuclear weapons budget – $100 billion annually – funds that could instead be used to “reverse climate change, eliminate poverty and address other social and economic needs”,

• Affirms UN Secretary-General Ban Ki-moon‟s description of the abolition of nuclear weapons as a “common good of the highest order”.

The statement will be presented to UN Secretary General Ban Ki-Moon on November 26th, the second annual day which calls for the reduction and elimination of nuclear weapons around the world. Following the failure of the May 2015 Nuclear Non-Proliferation Treaty Review Conference, the statement is one of several attempts being made to encourage countries to get back to the negotiating table and kick-start the talks to ensure nuclear non-proliferation and nuclear weapons abolition.

NFLA commemorates and celebrates International Peace Day and the International Day for the Abolition of Nuclear Weapons. The joint statement by Mayors for Peace, Religions for Peace and PNND is a real challenge to our civic leaders across the country and around the world to be engaged in challenging our governments of the need to find new ways to reduce nuclear weapon stockpiles. If we do not act quickly the potential for additional states to acquire nuclear weapons intensifies, and the possibility of a terrorist device using nuclear materials increases. In any event, it will be our towns and cities that will be under dire threat. NFLA calls on the UK Government to take these issues seriously, rather than putting all its efforts into full Trident replacement.”

(1) August 6th statement by Mayors for Peace, Religions for Peace and PNND:

A Nuclear-Weapon-Free-World: Our Common Goal
Statement by parliamentarians, mayors/civic leaders and religious leaders to commemorate the 70th anniversary of the onset of the nuclear age and the foundation of the United Nations

From the ashes of World War II, and in the wake of the nuclear bombings of Hiroshima and Nagasaki, the United Nations was established with a common vision to end war and with its first resolution to eliminate “all weapons adaptable to mass destruction.”

70 years later, over 16,000 weapons remain in the world‟s arsenals costing $100 billion annually – funds that could be instead be used to reverse climate change, eliminate poverty and address other social and economic needs.

As parliamentarians, mayors and religious leaders we join together to highlight the continuing risks of a nuclear catastrophe – whether by accident, miscalculation or intent – and the moral and security imperative to achieve nuclear abolition.

We reaffirm UN Secretary General Ban Ki-Moon‟s description of the abolition of nuclear weapons as a “common good of the highest order.”

In special ways mayors and local authority leaders are responsible for protecting the safety and welfare of their citizens, as well as preserving and promoting cultural and environmental values and heritages; parliamentarians for national policies and laws for the benefit of present and future generations; and religious leaders for advancing the shared moral principles and respect for the well- being of all people regardless of ethnicity, nationality or religion.

Together – as mayors / civic leaders, parliamentarians and religious leaders – we support the common good of nuclear abolition. We reject nuclear weapons, which threaten our humanity, contravene our moral principles, violate international law and thwart the safety and well-being of current and future generations.
We commit to principled action to advanced shared security and well-being based on deeply held and widely shared moral principles, the rule of law and a profound commitment to non-violent conflict resolution.
We call upon world leaders to commit to nuclear abolition and to replace nuclear deterrence with shared security approaches to conflicts. We further urge states to advance a nuclear weapons convention or framework of agreements that eliminate nuclear weapons.

We pledge to engage our constituencies and to strengthen the cooperation among religious leaders, parliamentarians and mayors / civic leaders to promote this vital mission.

Adopted in Hiroshima on August 6, 2015, for presentation to the United Nations on September 26, the International Day for the Elimination of Nuclear Weapons

(2) For further information on this initiative go to http://www.unfoldzero.org

Nuclear Free Local Authorities tackle in practical ways, and within their powers, the problems posed by civil and military nuclear hazards. As the local government voice on nuclear issues, the NFLA are keen to encourage local authorities to adopt nuclear free policies and support renewable energy initiatives. Councils are encouraged to join our network.